Why the Need to Develop Interpretive Signage along the C&W Trail:

The Columbia Western Railway (C/WR) was crucial in the development of the West Boundary and West Kootenay area. The discovery of Gold, Silver, and Copper, with other minerals like fluoride and limestone gaining importance in the new industrial age of steel along with precious metals being found in Southern British Columbia. This on the heels of the California gold strikes.

Settlers moved north to find vast material wealth in the West Kootenay and Boundary regions. The Americans were trying to develop dominance in the development of the region with the building of the “James Hill” Great Northern Railway. Railways like the Great Northern and VV&E were being constructed from the USA to make ready to haul the ore to the United States to be processed and smelted into rich metals.

The push for a railway in Canada was extremely important to the BC government in order to stop the Americans from exporting the raw materials to the US smelters down south. The Gold Act was passed in 1850 and soon came the construction of the Dewdney trail being constructed after silver and gold were discovered on Toad Mountain near Nelson. As travel was restricted due to high mountain ranges and deep lakes and rivers the paddle-wheeler became necessary in travelling the vast water routes for transportation and the movement of goods and people to the area. The C&W railway had been built to connect to the Arrow Lakes and to its main line at Revelstoke. The famous SS Moyie travelled the Arrow lakes for more than fifty years supplying each community along the waterway.

Rossland’s ore was being hauled by an American railroad though Republic, Washington. There was a critical need for a connecting rail system to gain Canadian interest in the Boundary wealth of rich ore. The Columbia and Western Railway was to be built from West Robson to Midway, a distance of 202 kilometers (125 miles). It took only two years to construct (1898-1899), at a cost of $5 million dollars at that time.

The first official train arrived in Grand Forks on September 18, 1899 with regular passenger service commencing September 23, 1899. The first shipment of Boundary ore was from the City of Paris Mine to the Trail Smelter on October 11, 1899. The railway reached Midway in the Spring of 1900. Every person in Midway and the surrounding area came to witness the occasion at the newly built station.

The locomotive engines at this time were driven by steam and many of the structures along the line were constructed to accommodate the steam driven engines and the many helper engines needed along the heavy mountain passes. Many water towers, coal bins and other infrastructure were located at stations beside the rail line and it’s Right of Way.

The Farron Station was located in the Monashee mountain near the Paulson Summit between Cascade and Robson near Castlegar. This was a large station that contained a two-stall engine house, a 25 ton coal hopper, a 40,000 gallon wooden water tank, section homes to house railway workers and their families along with a maintenance facility for the day to day jobs to keep the steam trains alive and well maintained.

With the advent of diesel engines eliminating the need for helper locomotives, the water tanks, coal towers and all of the early infrastructure at the various stations soon disappeared. The railway stations, section houses, workers and telegraph operators houses were torn down and burnt to avoid paying taxes and insurance on them as they were no longer necessary for railway operations. 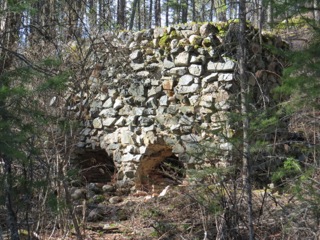 Suggestions How to Proceed:

Our meetings are on hold due to COVID-19.  We are working on having a digital/online meeting in the future.  Please let us know if you have any questions about our meeting schedule.

Check our Facebook page for rides.  These are not club sanctioned rides but are a great way to get out and meet others.

Contact us to hold or promote a club ride or event.

Ride at a safe speed